Get out of the Loop: Why We Ruminate and Six Ways to Stop Overthinking 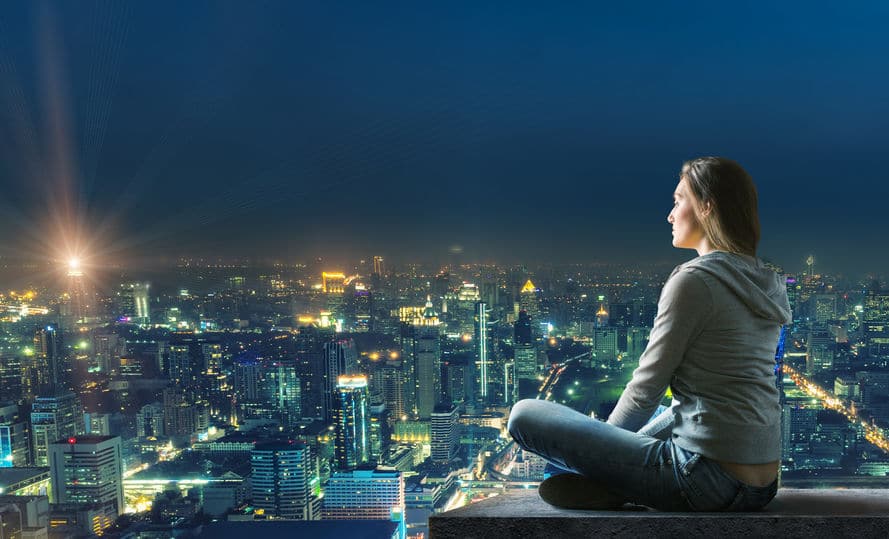 You know how it is when you have a song stuck in your head? Like your brain is stuck in a loop that just keeps playing over and over again?

Very few of us make the mistake of thinking there’s anything helpful about being caught in that loop. While it isn’t doing us any real harm, we know that it also isn’t doing us any good. It’s just a quirk of our nervous systems, and the sooner we can get the song out of our heads, the better.

Of course, it’s not just songs. A lot of our thoughts are like that—repeated loops of the same thoughts over and over. And they aren’t all as harmless as singing the first four bars of that song from Hamilton a hundred times a day for a week.

“Why did I say that dumb thing yesterday? What do they think of me? I’ll never recover from this. I’m so inadequate.”

Being stuck in a loop like that can be downright miserable. Just like the much more poetic loop from Hamilton, it can get lodged in our brains and just not let us go.

But unlike music, this sort of rumination can have very real, and very powerful, negative effects.

Why Rumination Is Bad for Us

Rumination (also called overthinking) has been shown to sustain or worsen sadness, foster negatively biased thinking, impair our ability to solve problems, and interfere with our concentration, motivation, and initiative. In fact, the evidence that overthinking is bad for us is so overwhelming that it’s fair to say that, to the degree that we’re plagued by rumination, we’re unlikely to become happier until we break that habit. It’s genuinely one of the most powerful things we can do to enhance our happiness and well-being.

Why is rumination so bad for us? I think the most compelling reason is that it extends the amount of our precious time that we spend feeling painful (and in these cases generally unproductive) emotions like regret, anxiety, self-recrimination, resentment, and fear.

One of the big differences between happier people and their less happy peers is that happier people tend to anticipate, savor, and reminisce about their experiences of positive emotions, thereby extending the time they spend enjoying them, while they rather quickly metabolize and move on from their experiences of more painful emotions. They experience painful emotions, to be sure—it’s an essential part of being human—but they don’t get stuck in them. Less happy people, by contrast, tend to spend longer marinating in painful emotions, reliving and anticipating them in a fretful, unmusical loop.

Rumination is one of the most common ways that we extend our experience of painful emotions. Rather than just experiencing them once, we re-experience them, fretting about things that are over and done with and often trivial in their practical importance. We even experience painful situations that haven’t happened yet—and may well never happen at all—wasting our time and emotional energy in anxious and usually inaccurate predictions. All in all, we dramatically increase the amount of time we spend experiencing painful emotions, which crowds out our opportunities to experience positive emotions like joy, gratitude, love, and amusement, and to take purposeful steps toward the lives we want to live.

Very few of my coaching clients come to me specifically to learn how to ruminate less. Generally, they’re seeking to make more practical and visible changes in their lives or work.

But we very often discover that they (like the rest of us) tend to get stuck in certain types of rumination loops—and learning to get out of those loops helps them to both feel better and make a lot more progress toward their coaching goals.

One of the hallmarks of Positive Psychology Coaching is its firm foundation in evidence-based approaches that have been demonstrated to help people genuinely thrive. So let’s have a look at some of the strategies that have been shown to be effective in learning to ruminate less—and thrive more.

Give Yourself Permission to Let It Go

But if I’m stuck in a ruminative loop, it’s tempting to think it has an important message for me, one that I need to think about it and learn from. So I may be reluctant to let it go.

As it turns out, though, rumination is generally not a source of important insight. The things we’re ruminating about generally aren’t profound or helpful. They’re just loops of fear, self-criticism, resentment, and worry.

One of the reasons why we think the content of our ruminations is important is that we’re usually the subject of those ruminations, and our brains are primed to pay close attention to news about ourselves. But ruminations almost never have useful news to share. They’re just loops of thoughts playing over and over, usually no more helpful (and a lot more painful) than the refrain from “Let it Go.”

So the first steps in overcoming a habit of rumination are recognizing that it’s not helpful and giving ourselves permission to, indeed, let it go. Once you give yourself permission to break the cycle of rumination, try these six strategies for doing just that.

1. Name it: We want to be alert to when we’re overthinking—to notice that we’re doing it. And when we notice it, we want to name it, saying something to ourselves like, I’m overthinking this. This labelling can help us get a little bit of distance from the rumination so we can recognize that it isn’t inevitable. It’s just something we’re doing, and we can choose to do something else.

2. Do something else: One approach is to literally tell ourselves that it’s time to stop ruminating, and redirect our thoughts to a neutral or positive topic, or distract ourselves with an absorbing activity that fosters positive emotions, like putting on music and singing or dancing, planning something that we’re looking forward to, going for a fast walk, or calling a friend and talking about something else. The key is that the activity should be absorbing enough that it interrupts the cyclical thinking and lets us move our attention to something better.

4. Think it through: Another way to break a cycle of rumination is to organize our thoughts. Rumination is a circular kind of thinking; we just keep going over the same hurts and worries without getting anywhere. But if we talk through our concerns with a trusted and empathic friend, or sit down and write about what’s going on, we are better able to organize our thoughts into a narrative, which can be extraordinarily helpful.

5. Take action: I recently found myself ruminating about the fact that I hadn’t had a physical in a very long time. I have a healthy lifestyle and am lucky enough to come from a family with fortunate genes, but I still knew that I’d let it go way too long. One day I noticed that I was caught in an overthinking loop that sounded something like: I haven’t been the doctor in years. That’s not very smart. Why don’t I go to the doctor? What’s behind this? What if I never go? None of this was helpful. So, when I recognized that I was caught in a loop, I made an appointment for a physical and was able to let the rumination go—freeing up time, energy, and brainpower for the things I choose to focus on.

6. Consider meditation: One of the most powerful ways to start breaking the habit of overthinking is to develop a meditation practice. Meditation strengthens our ability to direct our thoughts, helps us to get some distance from the concerns we’re ruminating about, and helps our nervous systems reset by calming the amygdala’s fight-or-flight response. Meditation also has well-documented emotional, cognitive, and physical benefits that we’ll experience even if we only practice briefly each day.

Rumination is part of being human. Our brains evolved to keep us alive by being hyper-focused on threats to our safety, security, and social standing. But for most of us in most circumstances, that hypervigilance is overdone, causing us to fret endlessly about a social gaffe no one really noticed or an upcoming presentation that we’re perfectly capable of doing well, if only we could put more time into preparing for it and less into worrying about it.

Since rumination is part of being human, we’re unlikely to eliminate the habit altogether. But we can learn to curb it significantly, by experimenting with different approaches, practicing what works for us, and spending less and less time in ruminative loops—so we can spend more and more time experiencing and savoring what is best in our lives.

Lynda Wallace is the Program Director and Lead Instructor of WBI’s Positive Psychology Coach Certification program. One of the country’s most highly sought-after coaches and teachers, and the author of the best-selling book A Short Course in Happiness, Lynda holds an MBA from the Wharton School and a Certificate in Positive Psychology from Wholebeing Institute. Before becoming a certified Positive Psychology Coach, Lynda spent 20 years as an executive with Johnson & Johnson, where she ran a billion-dollar global business including some of the world’s most iconic brands. Galvanized by the compelling findings of positive psychology, she left the business world to begin a new career doing work she genuinely loves, helping others to create positive change in their lives.