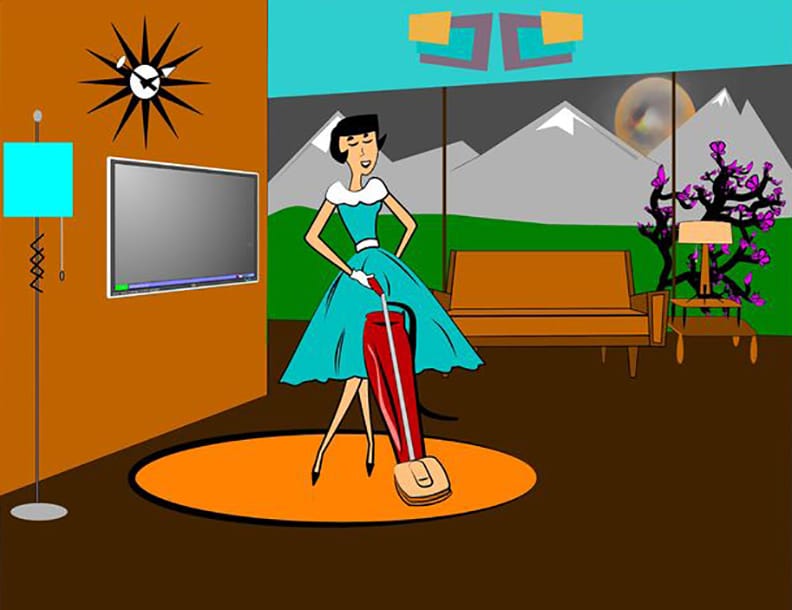 June Cleaver actually wore pearls when she was vacuuming, according to the television portrayal of the perfect mother in the 1960s show Leave it to Beaver. Along with that string of pearls over a meticulous dress, June’s neat bob was perfectly coiffed. I’m sure her domestic perfection was a curse to the “real” women of her day.

Women — and men — still struggle today under cultural norms with ideas of how parenting, relationships and life should look. Trying to keep up with an illusion of perfection is exhausting.
My day of supposed perfection came when we decided to take a family field trip to a museum. For most of the day, it actually was perfect. The two-hour drive to our destination built anticipation for my son and daughter, who were seven and ten at the time. When we arrived, the museum itself was engaging and fun for all of us.

The ride home, however, was another story. The kids were tired and hungry (and truth be told, my husband and I were, too). The day turned from perfect to nerve-wracking when the two began arguing ferociously in the back seat. You know what it’s like trying to focus and drive when two hyenas are behind you creating a ruckus. As only siblings can do so well, they each blamed the other for the misery, increasing in volume as the expectation arose that one of the parents in the front seat would step in to dole out the obvious justice.

My husband and I took turns handling the situation poorly, by first getting angry with the children and then getting angry at each other. We were the antithesis of the Cleavers.

Rather than keeping up the façade of what a family trip should be like, I decided to just name the truth of our experience. I said, “We have one impatient mom, one angry father and two fighting children in this car.” The kids stopped their bickering for a moment and I said, “We have two quiet children in the car.” What started as a desperate attempt on my part to maintain sanity ended up being a game, with the kids joining in, naming their experience as we drove along.

As we played the game, it was evident how often our emotions changed. During the course of one short trip, we moved through anger, laughter, peace, talking, debating, fighting and a few other states of being.

Illusions of what a holiday should look like, how clean our house should be, the clothes our children should wear, the schools they should attend, the raise we should get at work, and how we think our boss should treat us all cause strife. Stress arises when our thoughts fight what is. My thoughts claimed, “Our family trip should be peaceful.” The reality was far from it.

Which causes more pain: thinking that our lives should look a certain way, or experiencing the truth of it? We spend so much energy trying to mold reality into our concept of perfection. It’s so exhausting and, of course, impossible.

When my daughter was two, she tried tantrums on for size. I found it absolutely hilarious. This little sprite of a thing would put her whole self into stomping her foot vehemently into the floor, folding her arms tightly against her chest, and leaning back and looking at me with a ferocious scowl. It only served to make me laugh. It was so cute. However, she didn’t appreciate my humor, so she escalated her tantrum by adding loud vocal commentary at the top of her lungs, to which I responded that this was not going to get her what she wanted. It would do the opposite, as a matter of fact.

There have been times in parenting (more than I care to admit) when my responses have come from a place of wanting to change what my children were honestly feeling. There are times I met those emotions with strong emotions of my own in a way that was not nurturing (again, more times than I care to remember).

What does come through clearly when I look at the ride back from the museum or at the tantrums was how compassionate it felt to both myself and my child when honest emotions where greeted with acknowledgement first instead of judgement and the need to fix or change them. Sometimes this acceptance was all that was needed to alter the course of the behavior.

To this day my now college-aged daughter stomps her foot when she’s frustrated. Then we both look at each other and giggle.

This blog post is part of a series for HuffPost Moments Not Milestones, entitled ‘The Moment I Stopped Being Perfect.’ To see all the other posts in the series, click here.