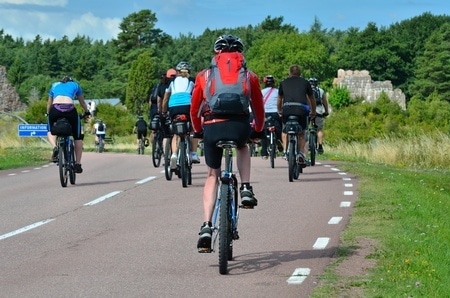 I am an anxious biker who is vaguely aware of the possibility of head injury at all times. On the day of my second organized bike ride, along with hundreds of others, I was feeling every bump in the road on this less-than-scenic route across Alabama strip mine country. Clipped into my sophisticated Trek bike as if I were on the Tour de France, wearing very tight bicycle shorts, and navigating the holes in the road on little bitty tires, I was feeling the potential to go down getting closer to reality at every moment.

Then, as I made a sharp turn and bumped along through the potholes, I heard a crowd cheering. About 50 people had gathered, carrying handmade signs saying, “Thanks Bo!,” “We need your help,” “Thank God for Bo and the riders,” and “We love Bo Bikes Bama, GO GO GO!” My heart opened and tears came streaming down my face. I had the urge to GO GO GO! It was one of those moments when I felt intense clarity and an overall sense that I was doing something of value.

I had been led to be part of this extraordinary event by Bo Jackson, the greatest athlete of all time (an All-Star in both football and baseball) and an authentic leader. (“Bo Knows” was the title of his Nike ad campaign.) Extraordinary things happen in the presence of authentic leadership, and the impact is that the rest of us get the chance to see the bigger picture. That’s what happened to me.

As I pedaled onward, clusters of people with similar signs were gathered every few miles to cheer us on. These were locals who had lost their homes and many of their neighbors in the devastating tornados that ravaged much of Alabama on April 27, 2011. Many who lost everything had no insurance, and their path to finding a home again was uncertain.

Watching all this on television in his safe home in Chicago, Bo was horrified. He had grown up in Alabama, and he started asking questions of the local leadership. He found that there was not enough money to help these people get back on their feet, and so he began pulling his resources together with the vision to raise a million dollars.

On the first anniversary of the storms, Bo embarked on a five-day journey across the state of Alabama, visiting many of the towns ravaged by tornados. He was joined by fellow professional athletes Scottie Pippin, Ken Griffey Jr, Picabo Street, and Al Joyner. Now Bo Bikes Bama is an annual tradition in which Bo and hundreds of others unite to ride for the future of Alabama and all her citizens. Money raised goes to support the Governor’s Emergency Relief Fund, specifically providing funds for the construction of community storm shelters across the state. The event inspires people from all over the region—who ride along or who hear about what Bo is doing—to look around them and help their neighbors.

Authentic leaders have multiple dimensions. Bo Jackson is famous for his legendary athletic skills. But there is more to his story. He is also a successful entrepreneur and philanthropist. We are honored to have Bo as our guest on the Authentic Leadership webinar series to discuss authentic leadership in life, next Monday, November 9. Come join us.

Karissa Thacker is a management psychologist who has served as a consultant for 200 Fortune 500 companies, including UPS, Best Buy, and AT&T. Her specialty is executive coaching, with a focus on increased performance combined with increased individual satisfaction at work. Karissa is the founder and president of Strategic Performance Solutions, Inc., a management consulting firm creating innovative solutions in the space of human performance and satisfaction at work. She serves as adjunct faculty for the Lerner School of Business at the University of Delaware.