Why Did the Turtle Cross the Road? 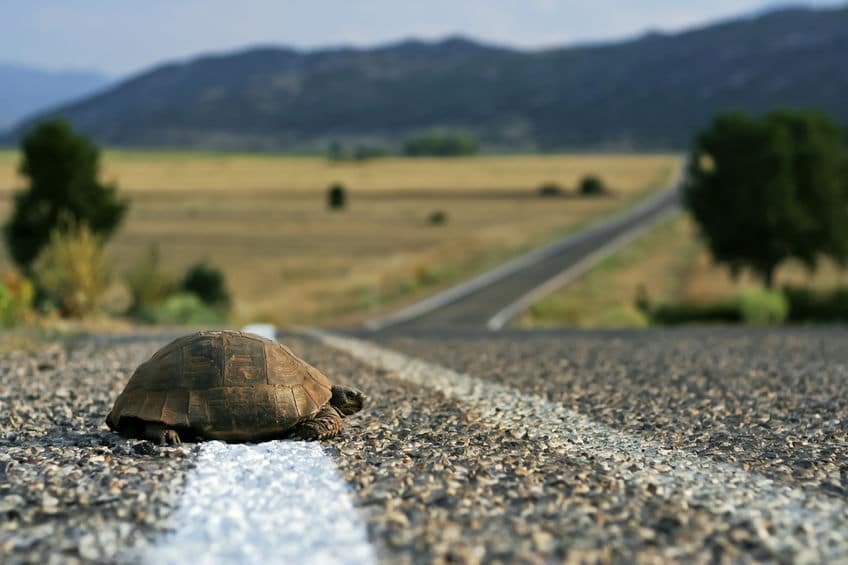 Celebrating a Micro-Moment of Positive Connection

The adventure started when I saw a slow-moving object in the middle of the road. I hit the brakes, pulled up close, stopped and got out of the car—leaving the door open and the flashers on as a warning to anyone who might pull up behind me.

And there it was—this wonderful turtle (a snapping turtle, I think). A young mother came along, pushing her child in a stroller, and stopped to see what I was doing. I was taking pictures, of course! She shared the moment with her young daughter as she started googling “turtles” on her phone to see if she could identify this traveler.

The turtle stopped when I got too close, resuming his slow and arduous journey only when I backed away. He was heading for the far side of the road. Step by step. Inch by inch. The epitome of persistence. But he wasn’t going to make it up and over the curb on the other side of the street. It must have looked like a mountain to him. He stretched his neck up as far as it would go, pawed the air, and tapped the cement with his right front leg—to no avail.

More cars came and stopped. Someone went home to fetch a shovel. We had gathered six humans by now, trying to craft a ramp out of whatever we had in our cars while encouraging the turtle on his way with gentle prodding on his backside with the metal shovel. Everyone pitched in. But the shovel was too small and too pointed, and we didn’t want to hurt him.

After about half an hour, a neighbor appeared, wearing thick yard gloves and carrying a big plastic snow shovel—you know, the ones that look like a curling ocean wave. He scooped up the turtle ever so carefully and set him on his merry way—safely on the other side, in the grass, headed towards the stream. We all applauded!

After everyone left, I started thinking … What if we could all get along like this more often, working towards a common goal with compassion and a very real desire to be helpful? Cooperating. Collaborating. Not caring about each other’s political party or marital status or sexual preference or skin color or religious affiliation or any of the multitude of perceived differences that didn’t matter one whit to anyone in our group of turtle rescuers—at least not for those precious moments in time when we were a team. What a wonderful world that would be, to be so focused on what is really important.

I’m grateful to have had that experience. Shortly after the event, I was reading Barbara Fredrickson’s book Love 2.0, in which she talks about positivity resonance and the value of “micro-moments” of warmth and connection. That really resonated with me. Even simply recalling the moments of our rescue mission as I write this, I experience a surge of hope and general well-being. Our little group was truly connected for a brief moment in time.

So, the turtle thinks he crossed the road just to get to the other side; I think he crossed it to teach us all a valuable lesson in working together for a greater good. What do you think? Why did the turtle cross the road?

Linda Wiesinger, CiPP5, is the founder of Why Not Sprout?!®, dedicated to the ideas that transformation is possible and that every single human being deserves peace, happiness, and contentment in their lives. A Certified Competent Coach trained in Julia Stewart’s School of Coaching Mastery, Linda has also studied nonviolent communication with Thom Bond, interpersonal neurobiology with Daniel J. Siegel, and mindfulness and character strengths with Ryan M. Niemiec. She holds a bachelor’s degree in psychology and spent more than 20 years as an international marketing research consultant in the pharmaceutical and healthcare industries, designing, planning and moderating hundreds of custom projects around the world. whynotsprout.com