The Yoga of Compassionate Caregiving: Letting Yoga Dance On and Off the Mat 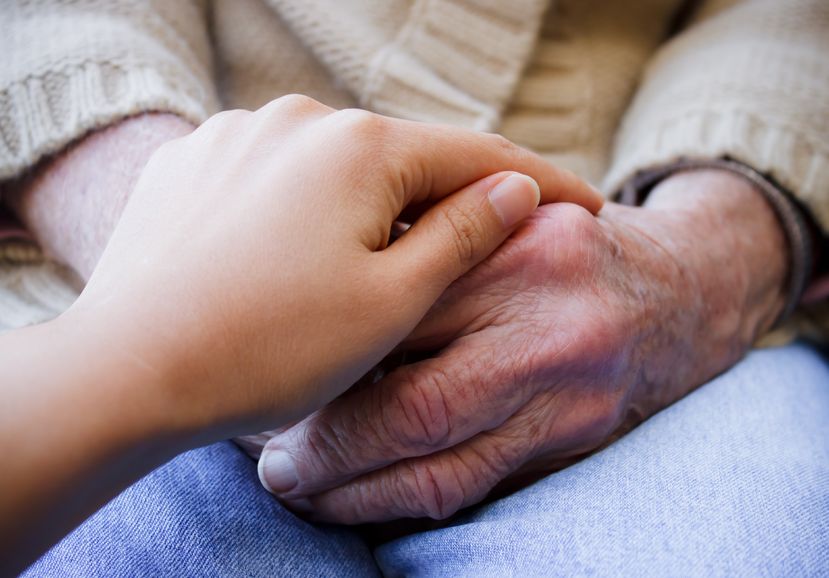 Marking the anniversary of both her parents passing, CiPP faculty Megha Nancy Buttenheim re-posts this moving piece about how to skillfully and mindfully be present with ill parents.

These days I’m experiencing what millions of baby boomers are going through—caring for parents as they near the end of life. Almost two years ago my 89-year old mother had a nasty stroke. Because she was already suffering from dementia, my siblings and I made the tough decision to place her in a nursing facility, one mile from my work at Kripalu.

Throughout my childhood, Mom had insisted on being given a poisoned pretzel if she ever became unable to care for herself. “I do not want to loiter!” she would declare. To add insult to injury, nine months later my 91-year old dad who had suffered from numerous heart attacks and artery blockages, moved to the facility as well.

At first I was miserable every time I entered the nursing home doors. Strange noises and smells assaulted my senses, and one squawking resident constantly yelled, “HELP ME.” Sometimes I would escape outside and cry by my car. The pain of bearing witness to this degradation, along with the realization that both my parents were actually now living within these walls, was sometimes too much for me to bear.

After a few months, however, I experienced a difficult but useful epiphany. My many years of living, learning, and teaching at Kripalu began to seep into my sadness. One day after bringing Dad back from a hospital visit, I found Mom in a demented tizzy. She was a mass of uncontrolled anger. After about thirty gut-wrenching minutes of trying unsuccessfully to cheer her, I finally gave up in despair. Then a little light switched on in my brain as I thought of the words, “Now the Inquiry of Yoga,” Patanjali’s first sutra (which I often chant with my students). In that moment I got at a bone level that right next to me was the nitty gritty practice of Yoga 101. Not hatha yoga with grand postures and buff bodies sweating in the Yoga Studio, but the yoga of life flowing inextricably toward death. In the next moment I recalled the Buddha’s first Noble Truth: “Life is Suffering,” and thought, “Must I suffer just because Mom is? Can I find a little more equanimity here?” I breathed again, Mom still agitated and unhappy as I began to practice the tried and true Kripalu methodology, “B.R.F.W.A.: breathe, relax, feel, watch, and allow.” Soon I felt a little more peaceful within the maelstrom of Mom’s misery.

As I drove home later on, other practices came to my rescue, such as metta, the practice of loving-kindness. I chanted metta resolves to Mom all the way home, while reflecting on “santosha”, contentment and gratitude. Serving a loved one with dementia means that I need to constantly seek and find gratitude in life, no matter what the circumstances.

My mini yogic epiphany happened many months ago. Now I’m accepting more readily that my parents have their daily ups and downs. The best I can do is practice the yoga of equanimity no matter what is presented to me. The yapping lady who cries, “Help Me” actually has a name: it’s Harriet. I have grown used to her bellows and have even grown rather fond of her. She is a part of the tapestry of my family’s “new normal.”

Nursing Home Yoga 101: By day I have been a teacher trainer of asanas, dancing yoga, meditation, yamas, niyamas, chakras, and chanting, but once the sun goes down (or whenever I’m free in daylight hours – not every day, mind you!) I become a cleaner, reader, caregiver, cheerleader, singer, bed maker, cook, card player, doctor driver, and occasional emergency room helper. As this list suggests, mothering one’s offspring and parenting one’s parents can, in an interesting role reversal, become one and the same. Luckily for both my folks and me, my four out-of-town siblings are wonderfully supportive. They visit all the time and work hard to ease my parents’ situation and living issues. But because Mom, Dad, and I are the ones who live in the Berkshires, I’m at the hub of this particular wheel of life.

To do this sadhana of caregiving while holding the posture of equanimity in the face of parental suffering has truly been a tapas for me. I feel I am living Patanjali’s first yoga sutra: “Now the Inquiry of Yoga.” It helps me to think of Ram Dass who said after his own stroke that he had been “stroked by his Guru.” I also look at my beloved father with awe; he himself is witnessing not only his own mortality but the crumbling of the mind of his dear wife of 66 years. He is doing his best to make lemonade out of a batch of bitter lemons. He is my hero and role model.

At this poignant time, Mom and Dad have become my greatest asanas. Thankfully two decades of practicing and teaching Kripalu Yoga and Let Your Yoga Dance have provided me with an on-the-mat focus; I have received so much joy from the practice itself, from the community of other dancing yogis, along with increased stamina and strengthening. The result is that I am finding a tender peace within this care giving seva; it’s actually OK! In fact, it feels like a great honor to love and serve my parents in a tangible way.

At the same time, I am learning the secret language of dementia which is quite a roller coaster ride. But it too has its blessings. When I smile into my mother’s confused and frightened eyes, stroke her face and say, “I love you, Mom,” she often begins to come back to herself. In those moments I feel I have danced my yoga very well indeed. When Dad agrees to sing with me the songs and hymns from my childhood, my heart bursts open as our voices blend. I see the possibility of creating new and lovely memories even in a nursing home.

This off-the-mat yoga practice constantly teaches me that much of life is just doing the next thing while “managing gracefully,” as Sylvia Boorstein likes to say. For me the key to peace is to remember to practice the following:

When I can just remember these practical, helpful spiritual tools, then the yoga of end-of-life care for my parents becomes more tolerable, sometimes even sweet. I wouldn’t ever wish this practice on anyone because it can be really hard, frustrating, frightening, and stressful. But with Yoga 101 I become aware of the ways in which my thoughts themselves increase or lessen the stress. I find myself holding the pain in one hand while in the other, I witness how fine Mom’s and Dad’s lives have been and I trust that all is well. In those moments I realize it’s possible for Mom, Dad, my siblings, and me to dance through this stage of life into death with grace and ease.

Postscript:
Dad died peacefully on Dec 11, 2006. Mom, even in her dementia, wasn’t about to let him hang out with beautiful female angels in the heavenly realms. She announced a few days after his death: “Donald is coming to pick me up in the winter car.” All of her systems began to shut down; her healthy body started to die. With the help of Hospice she quietly passed away quietly eleven days later on Dec 22, 2006.
They were together again in time for Christmas.

A version of this article was published in the Kripalu Yoga Teachers Association Bulletin, Fall 2006, and excerpted in Yoga Journal’s OM Page, Dec 2006.