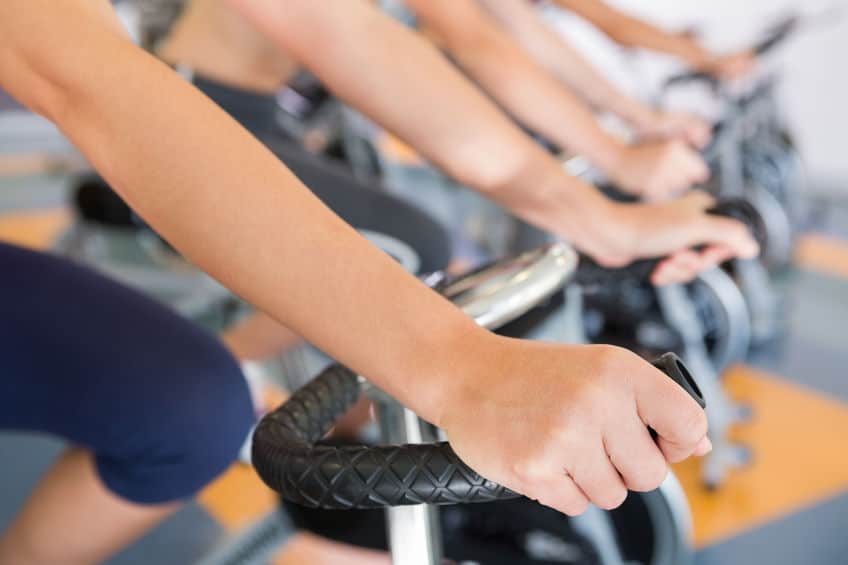 I have been going to Flywheel religiously two days a week for several years. Flywheel is a spin class where you ride a stationary bike to music with an instructor leading the way. I love the dark space where I zone out and ride to the beat. The music fills me and I get taken away on a journey each time.

During class, you accrue a score based on your effort, a calculation based on resistance and speed. I somehow get the same score every … single … class. For a while, I tried to increase my score by saying to myself before class: “Work harder!” Not surprisingly, that was ineffective.

As they say, “Nothing changes if nothing changes.” So I decided to do things differently. I made a plan before class, implemented it, and immediately got a score 15 points higher than usual (an increase of 6 percent). I used the same methods that I give my clients when they’re working toward a goal, and it worked.

Here’s an outline of my plan, which can be applied to all our goals.

Ask.
I had the opportunity to chat with an instructor after class a few weeks ago, and I finally revealed my frustration. Why couldn’t I increase my score? He suggested a technique to try: I should focus on my speed rather than my resistance. This had never occurred to me.

Breathe.
I’m a yoga instructor, so you would think the importance of paying attention to my breathing would be obvious to me, but it wasn’t. Sometimes I would panic and breathe too quickly and shallowly. I needed to take some deep breaths to help me along. By connecting with my breath, I was able to stabilize my mind and get back on track.

Feel the fear and do it anyway.
As a student of The Artist’s Way, by Julia Cameron, I have learned that procrastination is just a form of fear. So I asked myself what I was afraid of. Why couldn’t I push past my number? What was holding me back? I uncovered the fear: the fear of being uncomfortable, the fear of getting hurt, and the fear of pushing too hard. I knew I had to move past these fears if I wanted to progress.

Take it one step at a time.
As a coach, I tell my clients to create bite-sized chunks when pursuing a goal. It can be intimidating to think about the big goal, so instead we break it down into a series of smaller goals. Spin classes include approximately a dozen songs per class, so I decided to focus on one song at a time. I made a mini-goal for each song. I did not allow myself to think three songs into the future; I just focused on the present song. How was I feeling right then? Could I add resistance, could I add speed? Was I working at the right pace for myself, right now?

Practice self-compassion.
How was I talking to myself throughout class? Was I being kind, or was I beating myself up? I promised myself that I would say supportive things like, “If you need a break after this song, you can take it.” This helped me to not panic when I was giving it my all during a song and worrying about whether I would be able to keep up this pace throughout the whole class. Knowing that I would listen to my body and take care of myself, I was able to increase my productivity. Self-compassion helped reduce my fear.

Be proactive.
It took me a couple years, but I finally decided to be intentional about the class. I wasn’t ready to make a change until I was ready. For the first couple years or so, I was just trying to create a routine for myself so I actually showed up to class. But, one day, I was ready to take my workout to the next level. If we want to shift something in our life, we need to give it the respect it deserves, by asking questions and taking action. When it is time to make a change, be intentional, methodical, and kind.

Amy Alpert, a graduate of the Certificate in Positive Psychology, is a solutions-focused coach with a practice based in positive psychology. A former human resources executive at Goldman Sachs, she holds a master’s degree in organizational psychology from Columbia University. This article was originally published on Amy’s blog at amyalpert.com.