Making Peace with All Our Pieces 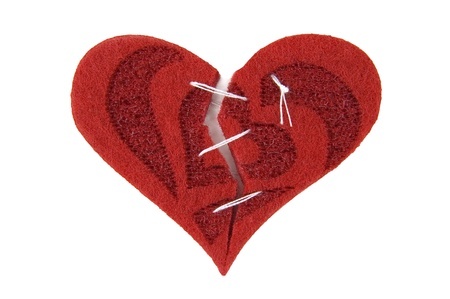 Four years ago, the man I was going to marry broke my heart, and I found myself virtually alone in a new town (one that I had moved to for him). Basic human functions like sleeping and eating felt unbearable. How could I even imagine showing up at work when my life had fallen apart? And to a job that made me miserable? I could barely breathe without him—how could I possibly be a productive employee?

But, the day after the breakup, I put on my “I can be a big girl” work pants and my “I am strong” lipstick, and braved the office. I could defeat these emotional demons. I replied to e-mails and went to meetings and created project plans. And I failed miserably.

Our false belief that we should have the capacity to compartmentalize our lives is one I see all the time in career coaching. Clients who are struggling—with divorce, illness, depression, sick pets, money problems—beat themselves up for their perceived inability to rise above this at work.

There’s a commonly used coaching tool known as the Wheel of Life, which looks like a pie divided into eight slices: work, money, home, spirituality, health, finances, etc. People rate their satisfaction level in each area. While it’s a worthwhile tool, if you’ve ever cut into a heaping blueberry pie, you know that it’s not so easy to keep the pieces neatly separated from each other. The filling spills out over the edges, just like in life. That’s what makes eating pie so deliciously messy.

So how do we make peace with our own messy pie pieces? Here are two coaching tools that can serve you.

Permission to Be Human
During my first Certificate in Positive Psychology (CiPP) immersion, Tal Ben-Shahar must have said the phrase “Permission to be human” at least 50 times. And it probably took all those times before its true meaning could get past my protective walls, powerful “shoulds,” and defensive ego. To give myself permission to act in ways that don’t make sense to others; to show up as I really am, not who I think someone wants me to be; to be vulnerable to those dark emotional corners of my heart. Especially at work, where permission to be human isn’t found in mission statements or company mottos.

An alum of my graduate school recently slunk into the chair in my office, sighed deeply, and told me that he was feeling guilty and anxious because he was considering a career shift into finance. While I love that my school is full of “save the world” types, it can be difficult for those who decide to take a different route. Not only did he feel like he was selling out, he was also terrified about making this transition, and he confessed that his fears were spilling over into his relationship and health.

After he spent a few minutes sharing his overwhelming feelings, I said those four magic words: “Permission to be human.” As I asked questions that invited him to explore his feelings and the impact he expected this change to have on his life, he started to sit taller in the chair, even leaning forward onto my desk. As he began to release judgement and accept the full range of his emotions, we were able to shift into a forward-orientated conversation about practical next career steps.

Self-Compassion
In the months following my breakup, when I wasn’t at work, I allowed myself to be self-pitying, self-indulgent, and negative about myself—everything that the self-compassion research says is counterproductive. I ate a lot of carbs and felt utterly alone and hopeless. And I believed that I was compartmentalizing these emotions and showing up as a productive employee.

But here’s the reality: When I was at work, I was impatient, distracted, and judgmental—certainly not traits of a flourishing team member. It wasn’t until I discovered two critical books—Self-Compassion: The Proven Power of Being Kind to Yourself, by Kristen Neff, and Radical Acceptance: Embracing Your Life with the Heart of a Buddha, by Tara Brach —and began practicing mindfulness and self-compassion, both in and outside the workplace, that I was able to get clarity on what I needed to begin healing. Releasing self-judgment in all areas of my “life pie” allowed me to be more patient, focused, and accepting at work—and eventually gave me the space to realize that my job was just not the right fit for me.

Not long ago, during a coaching session with a very driven and accomplished client, I immediately noticed that her “get up and go” drive was stalled. I redirected our coaching just slightly to create space for her to share, which she did. Devastated by a recent breakup, she was feeling utterly hopeless about her job search. Pieces of her “life pie” were spilling over.

I paused our career exploration to listen, validate, and offer self-compassionate coaching questions designed to normalize her emotions, encourage self-care, promote resiliency reflection, and foster strength-mining. Halfway through our session, I could sense that she wanted to hit the “play button” again, and we returned to her job search strategy. She recently e-mailed to say that considering the question “Is this helpful?” has particularly supported her in building self-compassion, while also staying focused on her career goals.

Just as I was finishing this post, Job Mob blogger Jacob Share sent an e-mail to all his followers with the subject line, “My wife had a miscarriage.” His vulnerability in publically sharing what his family was going through, and the resulting delay in the launch of his new job-searching project, was courageous. I was inspired by his bravery in embracing life’s messiness, and acknowledging how it can impact our professional goals.

Eventually, my heart healed from my devastating breakup. I learned to breathe and eat and run again. I changed jobs, and now I absolutely love what I do. While I’m still searching for the love of my life, I know now that, in order to flourish in all areas of life, we must embrace the whole pie, in all its beautiful messiness.