How Love Became the Currency of My Career and Life 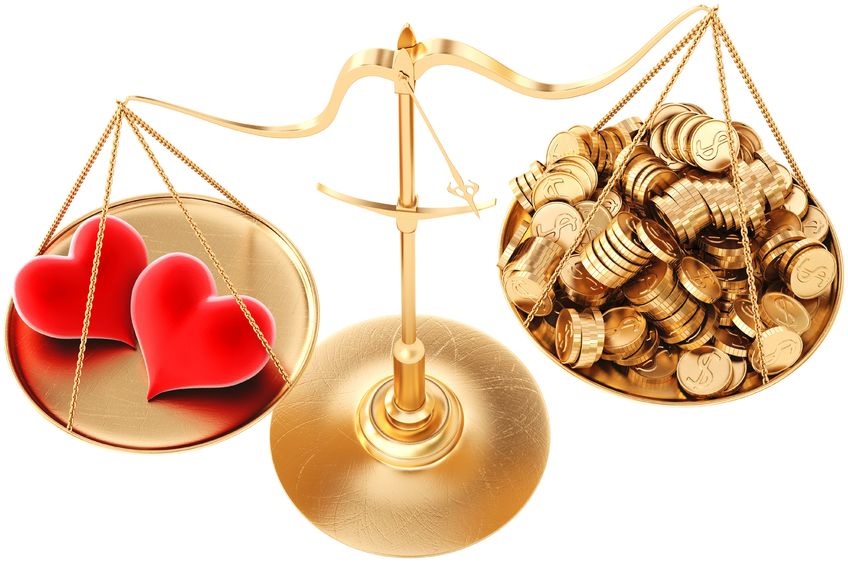 Recently, a comment by an associate took me aback. We were discussing opportunities for cooperation when he threw out a comment: “I’ve noticed your business has become weaker recently.”

At first that put me on the defensive; then self-criticism was about to take over. But, before my typical circle of self-depreciation set in, I managed to say to myself: Hold on! It’s not at all about weakness, even if it might appear so to someone on the outside. It was my conscious choice to rescale my business activity based on different priorities than before. I am merely receiving feedback from the world that my plan actually worked.

So I stopped blushing (which I imagine is happening whenever I am confronted with something that hurts my ego) and was able to continue our conversation on more solid, self-reliant ground. But this got me thinking about my values.

There was a significant event in my life that caused me to refocus my life priorities: My mother died after suffering a rapid health deterioration in a hospital in a foreign country, before I manged to get there and say goodbye. The reason I didn’t get there in time was my work. I was so stressed about delivering good results in a place where I had recently started to work that I convinced myself that maybe my mom’s situation wasn’t so bad, and I would be able to go a week later. I was mistaken.

Over the course of next two years, my awareness of the value of love grew. I felt heavy-hearted whenever I had to shorten a phone conversation with my father or grandma because of some pending task. I was sad to leave my niece’s party early because I had to be at work the next day in another city. It didn’t feel right that I was often declining my friends’ invitations to go dancing on weekdays because I had a meeting early next day. Too often, I was prioritizing something that actually wasn’t giving me nearly as much joy and meaning as being with the people I love. So I made the decision that I would never again allow my work to interfere with the important relationships in my life.

That meant exiting the corporate rat race. It had become clear to me that achievements in this environment did not outweight the sacrifices made in other realms of my life. I recalled a story that Tal Ben-Shahar shared about his decision to leave the high flyer’s life in the United States to raise his family in his native Israel. That basically meant reducing his career prospects; he would not be as involved in the Harvard academic network or as easily available when a major news broadcaster wanted him to weigh in. But he decided in favor of Israel in order to be close to the resources of love—a big family with grandparents, many uncles and aunts, and, as he put it, a very child-friendly community. But, nevertheless, he was able to continue a fantastic career in positive psychology.

His example gave me the courage to step out on my own. I established my own company, offering personal development courses for businesspeople, with trainers coming from all over the world. And, for the first three years, it went really well—business was prospering and I had a plenty of time to engage with my family and friends.

But then a change in the market brought my business suddenly to a halt. I was struggling hard to gather a group for the courses that had been popular just six months ago. At first, it puzzled me, and then the continuous struggle created self-doubt: How had I missed the signs of this coming? Did I have resources within myself to come up with a solution? Did I have what it takes to run my own business?

During this period of relative inactivity, I started to spend even more time with my family. I had more time for deeper conversations with my sisters—from coaching sessions to discussing the values of our family. I had time to research family history, and join family gatherings and trips. And I had a chance to reconnect with friends all over the world that I hadn’t made time to see before. Invitations were pouring in; if I’d wished it, I could have been traveling every other week. “Come—Berlin … Dubai … New York are waiting for you!” I was surprised that there was so much love for me out there. I hadn’t been aware of it when I was working all the time. And, while my savings were running out, my account of positive emotions was growing immensely.

With less money to spend, the currency of my life became my character strengths: my zest, humor, appreciation of beauty and excellence, my curiosity, my love. Friends were (and still are) writing to me: “Come—we want to share your positive energy!” Without money in the picture, it was clear to me that my strengths are my true valuables—they bring me love, they are always with me, I can share them inexhaustably, I can build the foundations of my relationships, my career, my life on them. The previous striving to establish myself as a separate individual was giving in to the realization of our interdependence and the role that a supportive community plays in our happiness. I became more grateful, modest, and flexible. The arrogance that money allows was falling apart in the ocean of immense opportunities that being in loving relationships brings.

In the background of this positive emotional momentum (inspired by my friend and positive psychology trainer Imbi Viirok), I got the idea to run personal development sessions myself, rather than rely only on external trainers. It was such an obvious thing to do, but it hadn’t occurred to me before. With a little additional training, I started a session—‘’Boost Your Energy and Motivation Level with a Focus on Strengths’’—in which I was able to gather and highlight the aspects of positive psychology that had helped me in accessing my sense of well-being. It was so successful that I decided to focus my professional activity around it. I experienced that fantastic feeling of bliss that comes when you love your job so much that it is the end in itself.

I believe that this period of relative low was given to me so I could access the foundations of love within me and form my life and career goals based on it. Yes, it might seem to my business associate that I have retired already at the age of 35, yet knowing that every little step I take is based on my fundamental values and strengths is so satisfactory that I wouldn’t exchange it for anything. My life is prospering, but in a different way. I often remember the words that my sister, a coach herself, offered me when I was in the midst of self-doubt: “You are doing everything right.”

Anda Klavina is a positive psychology practicioner and art consultant operating in Riga, Monte-Carlo, Basel, and around the globe. leaderswithguts.lv.