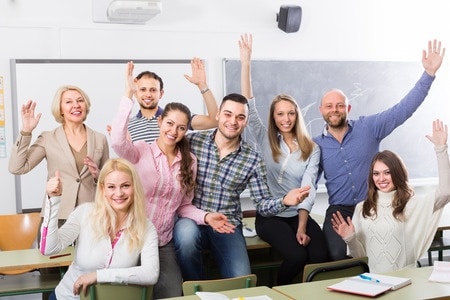 It might be hard to believe, but I actually considered not signing up for the Certificate in Positive Psychology program at Kripalu, because the process of finding a small study group seemed so daunting.

When I asked Megan McDonough, WBI CEO, about my misgivings, she told me, “Trust the process.” I can’t say I was reassured. That’s not an approach that lawyers, which both my husband and I are, usually take to these kinds of situations. Planning, anticipating, analyzing, understanding, and taking responsibility would be a more common approach for us.

It did help that I threw myself fully into the program before and during the on-site immersion week. I began by reading everyone’s posts during the first month before the immersion. It gave me a sense of security when I arrived at Kripalu, knowing that many of the strangers I was going to meet were people like me, in that they shared a desire for connection through authentic conversation.

And, when I arrived at Kripalu, I made it a priority to meet as many people as I could—whether for a five-minute conversation or a 50-minute conversation. I don’t think of myself as outgoing (although my friends do), but it was so much easier at Kripalu, because everyone there is interested in meeting everyone else. And it wasn’t important what we do for a living, or how old we are, or whether we have kids. It only mattered that we had all chosen to be there.

Being outgoing and taking the initiative to talk to people worked out great, because I met two women on the first day who later asked me about being in a group together. So, when we began the small study group selection process on Tuesday evening, I didn’t have the anxiety that I would be the only one without a group.

The interesting thing, in retrospect, is that it wouldn’t have mattered. First, there were one or two people who didn’t initially find a group to join, and those people were enthusiastically welcomed by all the other groups. Second, the success of the groups is really based on what happens after the group is formed—it’s based on how much we are willing to open ourselves and share with each other.

Now, I look at my group of six and marvel that we all came together. We are different in many ways—age, life experiences, work. These differences add so much depth to the group dynamics. And we are similar in many ways: We all share a desire for connection, and we all are willing to share who we are, at the deepest levels, with each other.

A few weeks ago, my study group had a reunion at my house. The weekend was one of “flow,” from the moment I picked everyone up at their various points of arrival until I drove them back to their various points of departure. For me, it is a dream of a lifetime to be part of a group of six women, all of whom open their hearts and their lives and are willing so laugh and cry and support each other. We live in different states (and one of us lives in Canada), span the ages of 42 to 66, and have known each other for only a few months—but, during our reunion, the cashier at the supermarket remarked that we reminded her of the Ya-Ya Sisters from the Divine Secrets of the Ya-Ya Sisterhood!

This is the beauty and wonder that came from trusting the process.

Daryl Lander lives and works as a lawyer in Washington DC. She has used what she learned in CiPP, which she calls a “life-changing learning experience,” along with her further studies in positive psychology, to strengthen and enhance her relationships with her family, friends, and clients.