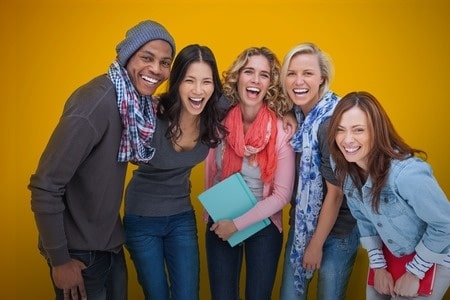 There were tons of great things about our last CiPP Tour, in Old Saybrook, Connecticut, on June 15, including the salmon made by our amazing hostess, Trish Walden (everyone raved about it!). But my absolute favorite part was playing a game called Telephone Charades.

Lori Tuominen gets the credit because it was her idea. She had seen this game played at Kripalu recently, and thought it would be a big hit. And boy, was she right!

Since it was Lori’s idea, I asked if she’d facilitate it, and brave volunteers Dana, Jeff, and Bonny stepped up. They were such good sports, because they had no idea what kind of shenanigans they were getting themselves into.

As the name implies, it’s a combination of the games Telephone and Charades. Here’s how it works (you can also find instructions here.)

First, Lori showed Dana and the rest of us a piece of paper that said, “You are an Elvis impersonator with allergies eating a taco.” Dana did a triple take, and you could see the wheels turning as she thought about how she was going to act that out without words. We all laughed—except for Jeff and Bonny, whose backs were turned. At this point, they were probably wondering what they had gotten themselves into.

Then Jeff was allowed to turn around, and Dana was onstage. I tell ya, if she ever wanted to be an actress, she’d skyrocket to stardom! She stood like Elvis, moved like Elvis, even danced like Elvis. It was obvious that she was impersonating Elvis. Well, obvious to us, but not so obvious to Jeff. He stared at her, trying to understand what she was doing. We laughed harder and harder as she began acting out the next part. Jeff stood there in a state of happy confusion. Bonny, still with her back to all of this, was wondering what the heck was going on.

Dana began to mime eating a taco, while continuing to shift her knees in the classic Elvis style. Then she started mimicking a sneezing attack. She repeated all of these moves over and over again. She was fully alive, completely in the present moment, and enjoying the challenge of communicating such a funny and difficult phrase without using words.

Next, Lori asked Bonny to turn around, and now Jeff’s job was to communicate this phrase to her. Jeff had no clue what he was doing, but he jumped into character like a firefighter into his gear. In no time flat, he was full-on giving his interpretation of what Dana had been doing. His knees were bent in a squat and flying in and out, back and forth, so fast it was almost a blur. That man can move! Meanwhile, he was sneezing his head off and pretending to shove something huge into his mouth. Tears poured down my cheeks and I nearly slid out of my chair, I was laughing so hard.

Bonny was laughing along with all of us, but with a look of amazed confusion on her face. Now she had to try and guess the phrase. She got the allergies part, but Elvis eating a taco was lost in translation. What wasn’t lost was the energy that the game created in the room.

Everything we do at a CiPP Tour relates to positive psychology in some way, and Telephone Charades was no exception. It was all about getting out of your head and out of your comfort zone, and it embodied the concepts of broaden and build, nourishing relationships, and even physical exercise—because we were all getting a serious ab workout from all the laughing. I think Elvis would say it was a little less conversation and a lot more action!

This was the first time this game has been played at a CiPP Tour, but I promise you that it won’t be the last. I look forward to laughing with you at one of our upcoming events.