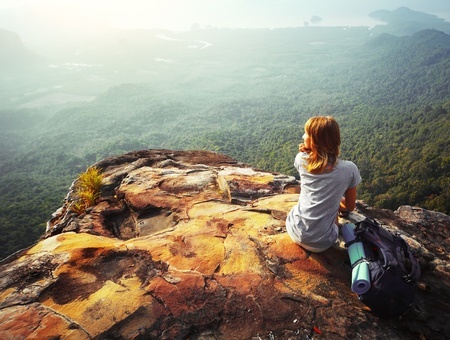 In 2004, Christopher Peterson and Martin Seligman published the landmark Character Strengths and Virtues: A Handbook and Classification, which identifies 24 universal strengths and six virtues. As I peruse the list, most of them seem to lend themselves inherently to feeling good. I love feeling gratitude, or enjoying a laugh, or being kind. Who doesn’t enjoy feeling love or feeling loved? For those like me, who love learning and are curious, doesn’t it feel good to satisfy that yearning for new facts and information?

But what about bravery and courage?

“I wish I had more bravery,” a friend said to me recently. “Of all the strengths, that is the one I feel I lack and should work on.”

That’s probably a common thought. Typical images of bravery or courage are the firefighter rushing into a burning building to save a child, or the soldier fighting for our safety, or someone battling disease. But the fact is that we all use all the character strengths to a greater or lesser extent—and that includes courage and bravery. Sometimes we just might not recognize it.

I think my friend is brave. For example, she has taken a chance on a career change. She knew she needed the change, but she had no certainty that it would be successful, no clear path for the future beyond taking the first step. That seems pretty brave to me.

I sometimes mix up being brave and courageous with being fearless. I know I’ve said things like, “It didn’t feel brave to me—I was terrified!” And yet courage quotes abound that tell us that this virtue goes hand in hand with fear. Martin Luther King, Jr. said, “We must build dikes of courage to hold back the flood of fear.” Mark Twain said, “Courage is resistance to fear, mastery of fear—not absence of fear.”

The VIA Strengths Classification defines courage as “emotional strengths that involve the exercise of will to accomplish goals in the face of opposition, external or internal,” comprising the strengths of bravery, honesty, perseverance, and zest.

Bravery is described as “not shrinking from threat, challenge, difficulty, or pain; speaking up for what is right even if there is opposition; acting on convictions even if unpopular; includes physical bravery but is not limited to it.”

As I read those words, I see them as not exactly synonymous with happiness or feeling good. Who wants to feel pain, threat, or difficulty? Who likes to face opposition? Who wants to be unpopular? Who chooses to feel uncertain, insecure, or vulnerable? I know I don’t, and yet one of my signature strengths is bravery.

Unlike the other strengths that feel good in the moment, bravery is a character strength to appreciate in retrospect. Looking back on that scary presentation or performance, the one that made you feel that you might forget to breathe, the one you dreamt of for days or maybe even weeks beforehand, it feels good to know you went ahead despite the nerves and got through it. Maybe you got through a tough time resulting from loss or illness, and you can look back now and see how you’ve grown, or how you kept putting one foot in front of the other despite your distress. As you appreciate your accomplishment, that is when you get to appreciate bravery.

So take a moment and look back now. Think about a time when you were scared, when one of your inner voices was saying, “This is too hard,” but you forged ahead and took on the challenge anyway, with energy and determination. In that moment, you were brave, you were courageous, and you were your best self.