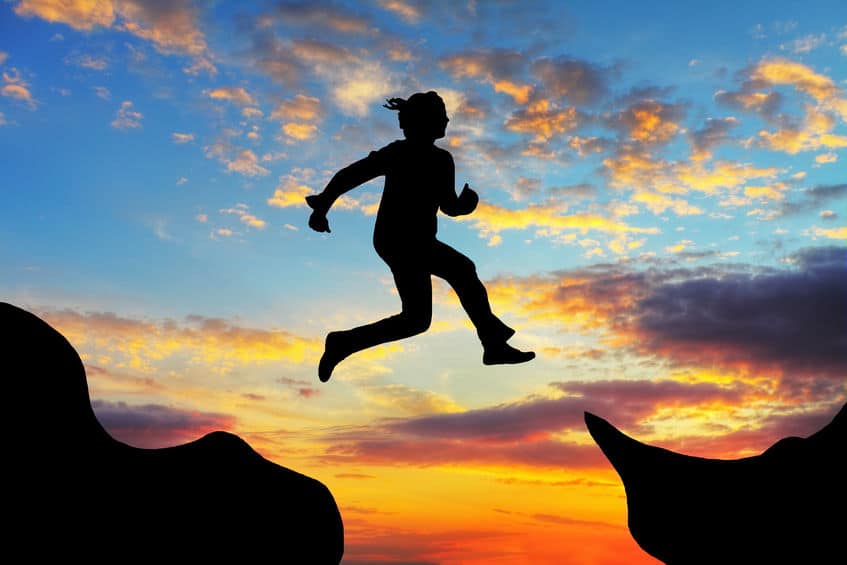 As a student in the Certificate in Positive Psychology program, I learned about something called self-perception theory. Developed by social psychologist Daryl Bem, the theory states that we form beliefs about ourselves by watching our behaviors, just as we form beliefs about others by watching theirs. We may therefore think of ourselves as confident after we act with confidence.

I like to think about this theory in terms of courage and risk-taking. When I muster the courage to do things that scare me and see that I do, in fact, survive, it gets easier to take risks and feel brave.

Twice in my life, I’ve left the security of a full-time job to follow my heart in the direction of an uncertain but more alluring vocational path. The first time I took this leap, in my late 30s, I had many wide-eyed, stomach-churning, “What the heck am I doing?” moments in the middle of the night. By the light of day, I just kept taking steps toward what I wanted and moving away from what I didn’t, trusting my gut to guide me toward something better. And it did.

The second time I abandoned a steady paycheck to rejoin the ranks of the self-employed, I was less frightened. I think that’s because I’d survived the first leap intact.

I once had a powerful dream about this. While making my way across tall rock formations in the Grand Canyon (dreams being dreams), I came to a place where the next rock was too far away for a safe leap. I froze in fear, somehow knowing that there was no going back. Suddenly, part of me split off like a cartoon figure and jumped, falling to the ground with a sickening splat. As I peered down in horror, I saw a crowd gather around my fallen self. To everyone’s amazement, she (I) got up, brushed off the dirt, and walked away, unbroken.

Up above, the frightened but emboldened me stepped shakily off the cliff. Immediately, a kind of magic carpet appeared under my feet and transported me, Aladdin-style, to the next rock. And so it went, all across the canyon.

This vivid dream came to me nearly 20 years ago during a time of great change in my life. It told me that 1) You may fall (fail) in front of other people, but it won’t necessarily kill you, and 2) When you take a step forward, despite your fears, help arrives.

As I tell my students and clients, amazing things can happen when we take that first, empowering, inertia-busting action. Or, as Scottish explorer W. H. Murray once wrote, “The moment one definitely commits oneself, then providence moves, too.”

Each time I exercise my courage muscles, I grow in self-confidence and faith, which are the real rewards of risk-taking. Last year, I had to summon enough bravery to own some really bad behavior and apologize. Recently, I overcame my fear of furniture painting to decorate a sweet little table for my home. While these scenarios may differ in significance, each one enhanced my self-perception: I now know that I’m someone who can admit her mistakes and be forgiven—and I’m apparently not too bad with a paintbrush.

I’ve asked others about risks that paid off for them, and heard stories about daring to leave unhappy jobs and marriages, and taking a chance on love. “I followed my own path against the odds, which proved my worth, at least to myself,” says a former student. Another writes that, “A trip to Europe nearly emptied my bank account at a time when my work hours were being reduced, but that trip broke me out of a depression and woke me up to possibilities again.”

A friend echoes my own aspirations when she says, “The greatest risk I take on a daily basis is being true to myself.”

Over the years, I’ve grown gutsier about taking big leaps. That’s not to say that I’ve conquered my fears about change and the unknown; I just meet them with healthy skepticism and move forward when I know, deep down, that what I’m doing feels right.

In the end, I believe it’s the things we don’t attempt to do that haunt us more than any so-called mistakes and failures. As the poet Mary Oliver suggests, we have one “wild and precious life” to live, and it’s not a dress rehearsal. Building courage muscles equips us for big leaps.

This post was originally published by Kripalu Center for Yoga & Health.

Kim Childs, a graduate of CiPP2, is a Boston-based life and career coach who specializes in positive psychology, creativity, and soulful living. She is also a writer, Kripalu Yoga teacher, and facilitator of workshops on creative and personally meaningful living. Read more at kimchilds.com.