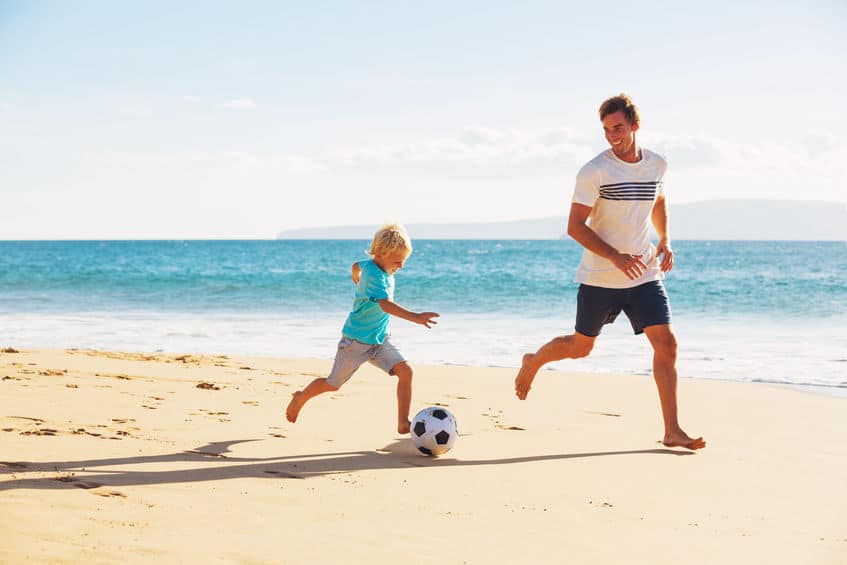 Every once in a while, I am called in for a critical and rewarding assignment: babysitting my granddaughter. We snack, bounce balls, handle toys, read books, climb steps, and jump on the couch or trampoline. But much of our time is spent doing one thing we are all familiar with, but which adults refer to by another name.

You and I call it running—she calls it playing.

Which begs the question, when did we start to think of running as anything other than playing? Even more to the point, what happens to our running when we go back to thinking of it as play?

Little kids like my granddaughter know that few activities are more fun than running, chasing, and stumbling around in a playful state of mind. In fact, this transformation from infant to little runner is so pivotal in our lives that adults literally redefine these adorable little creatures once they start their genetically compelled locomotion at this particular age. Kids who discover how fun it is to propel themselves in an upright manner are no longer babies, they are toddlers. A toddler’s primary job? Play.

Play shapes the brain, opens the imagination, and invigorates the soul. Almost all early learning takes place through play. Research shows that it doesn’t have to stop there. Play is our job, too.

“[Making] play part of our daily lives is probably the most important factor in being a fulfilled human being … We are built to play. We are built through play.”
—Stuart Brown, MD

Stuart Brown has studied the effects of play on human development for decades and concludes that play—for both children and adults—is essential to cognitive, social, and physical health. “Nothing lights up the brain like play,” he explains in his TED Talk called “Serious Play 2008: Play is More Than Just Fun.” Be it imaginative play, solo play, collective play, playing with objects, rough-and-tumble play, the play associated with storytelling, or the kind of play we perform as runners (what Brown calls “body play”), play has been integral to our species, a unique factor that drives our survival and adaptability.

So don’t be misled—play isn’t just a form of childhood training for something else. We play for play’s sake. We play because we are players.

“Play has a biological place, just like sleep and dreams do,” Brown explains. His book, Play: How it Shapes the Brain, Opens the Imagination, and Invigorates the Soul, and his three-part PBS series, The Promise of Play, go even further in making the connection between adult play and a happy, productive life.

So, if we believe my granddaughter that running is play, and we understand what Dr. Brown says about how our brains crave play and flourish when we play, then why don’t we always automatically feel infused with neurotransmissions of joy every time we run?

I’d say it’s because, for most of us, we’ve forgotten how to play. Get this—I lost touch with how to play so much, I had to take a course on it! How grown-up is that? It’s true. I have been a part of Family Week at Omega Institute, where one of the feature courses every year is The Joy of Play with Joe Killian. Every day for a week, a group of very grown-up grownups gathered and played games with both intention and abandon. We not only had fun, but also learned about ourselves, and (at least for me) made lifelong friends.

So why do we need to take courses and study research to do what my granddaughter does naturally, even though she can’t say the alphabet correctly every time?

First, because play is more important to her than the alphabet. Second, grown-ups are good at taking the fun out of everything. Running is the perfect example. When it feels like work, it iswork. When running becomes something we force ourselves to do for exercise, that’s all we get from it. While those benefits may be substantial, they are not the whole story. We only get the full benefits of running when we Run the Whole Way and approach it as play.

The essential principle is simple: It’s not the act itself that makes something fun or playful, it’s our approach and mindset.

Some people (like professional athletes or poker players) play games for a living and it feels like work. Likewise, there are people we know who can take an ordinary or even unpleasant task and make it seem like fun. Playfulness is an attitude we can bring to anything—and it can make all the difference when we are trying to motivate ourselves or others to get something done. Would you rather force yourself to do something boring or let yourself have some fun? Would you have more luck dragging someone to “do some exercise” or inviting them to play?

A run, performed by two different people with two different mindsets, can feel entirely different and generate very different levels of positive emotions. So it’s up to us: We can make our runs feel like work or like play, depending on how we approach them.

When running still feels more like work, try changing your mindset by asking yourself questions like, “If running were fun, what would that look like?” or “What would it feel like for me to have fun running?” Also take a moment to think about when running hasbeen fun for you—what’s been different about those times? Can you replicate aspects of that experience again?

In general, asking yourself these questions can be a starting point for having more fun, by training you to notice and appreciate the times when you find yourself immersed in play, whether it’s in running or other parts of your life.

Inside Track to Happiness Exercise: Playful Running
Look for ways to bring joy and laughter to your runs. Every run isn’t going to be a giggle-fest, but each one offers us the opportunity to bring at least a little play into our lives. Here are a handful of ways I’ve come across to add some fun to the run.

Group Runs: This is the best way to find fun people to run with. The runs can be fun in and of themselves, plus can help you find the right running partners who bring out your own playfulness. Look for Facebook posts from a local running club or running store, or training groups associated with local races. Even bars and apparel stores are now organizing runs that may fit your schedule and introduce you to new people that share your interest. When you do come across someone in a run who makes it fun, reach out to see if there are more chances to schedule runs together.

Outings: Runners who know how to make it fun are often the kinds that like to organize outings—like participating in relay races, special costume or novelty races, or otherwise quirky traditions. You have to look a little to find these people, but if you keep showing up at local running events, they will be there. For example, I happened to find a local group that runs to a secret location on a nearby mountain where one of the leaders stashes champagne for a mid-run toast while looking at the view over the city. I’ve never had more fun running straight uphill for two miles.

Here’s a story I wroteabout accidently joining a running group that was using their route to spell out the initials of their club on their GPS maps.

I’m not a drinker, but if you partake, you may also want to look into this “drinking club with a running problem”that organizes runs in more than a thousand cities worldwide and prides itself on eccentric costumes and social activities (often involving alcohol).

Carryon/Dropoff: If you are running with another person or a small group, you can add an element of fun and cleansing of negativity by bring along something like a tennis ball to pass along between you throughout the run. Just having that little toss-and-catch connection with each other adds a bit of levity to break up a long run. To make it even more engaging, you can set a rule for passing—like, whenever someone brings up a certain subject that should be “dropped off,” like stressful work or ex-husbands or defiant children, they get the ball tossed to them. Or you can pass the ball every time someone laughs.

Scavenger Hunt: Another fun way to spice up a run is to come up with a long list of things you might or might not see on your run: common things like a man eating or a dog drooling, or more unusual things like someone with yellow pants or something stuck in a tree. Put them in a hat and draw the items, then see who finds the most items on your run. It’s kind of like Car Bingo.

What Will We See Next?: A more spontaneous version of Scavenger Hunt, this involves one runner coming up with something you might see on your run—say, a child in a stroller. The second person comes up with something that seems to them just as likely as seeing a child in a stroller—maybe a person smoking outside a restaurant. The first person then gets to choose which you will see first, the child or the smoker. You can try to keep track of multiple “What Will We See Next” spottings or simply wait for the first one to be resolved before coming up with a new one.

Just about any game you’ve played in your car on a long road trip can be adapted to play during a long run. For example, instead of looking for different state license plates, look for types of birds, or brands of running shoes on fellow runners.

Word Games: My favorite word game is Ghost, in which players take turns adding letters to a growing word fragment, trying not to be the one to complete a valid word. There are variations, including my favorite, Superghost. Not every runner may find word play fun or something they can do while running, but those who do will get a little break from the normal routine.

Solo Fun: If you are by yourself, you can still add some play to your run. My favorite approach is to take unusual, spontaneous routes that take me past interesting places and areas where you’ll see people, like Main Street, college campuses, public spaces, and playgrounds, rather than trails or nondescript roads. I will sometimes also intentionally change surfaces as much as possible and keep track every time I shift from a sidewalk to a patch of grass to a few steps on a curb to a paved street. I like to shoot for at least 25 surface changes. You can also do the Scavenger Hunt or What Will I See Next (above) games by yourself.

Skipping: Why not go ahead and skip for a few strides every once in a while? I dare you not to smile!

How do you have fun when you run? Let me know directly or through comments if you have feedback, interest in collaborating, or ideas for me to consider as I continue to develop the WholeRunner model and program. Watch for the next installments in this blog series—and check out my previous posts and series for the blog here.