The Wonderful Thing About Triggers 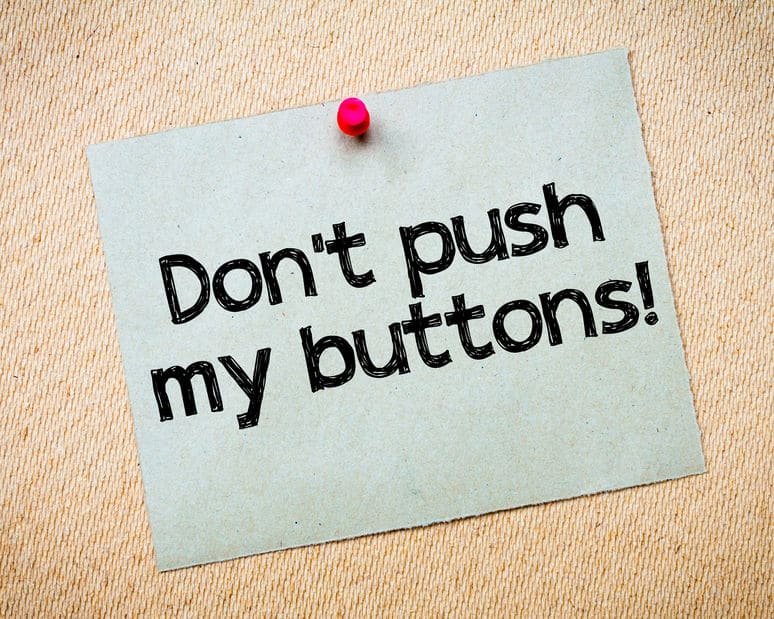 Triggers. We all have them. Anyone who came through childhood has them, which I assume is pretty much all of us. Someone says or does something—looks at us with a certain expression, uses a particular tone of voice, criticizes us unfairly—and we are off to the races. We actively create all sorts of stories and beliefs in our minds, so many that it can feel as if we are tripping over them: They did it ON PURPOSE and with full malice aforethought. They hate me. They are MEAN. I must have screwed up. I must have done something to deserve this (whatever “this” is).

Triggered emotions can overwhelm us; thoughts race and add fuel to the fire. Somewhere deep inside, we know that our reaction just might be a teensy bit out of proportion (ya think?). Yet we feel powerless and out of control.

Being triggered is at best uncomfortable, and at worst, a feeling of such dread that you almost wish the world would open up and swallow you whole. You are in full-on fight-flight-freeze-or-faint mode (yep, there are 4 Fs now). What makes it even scarier is that you don’t always know how you got to this point. All you know is that you are a mess, your panties are in a bunch, and your nervous system is pounding on overdrive. To cope, you develop all kinds of strategies to ignore, evade, and outsmart these feelings and reactions because they are so uncomfortable and scary. At least, that’s what I did.

Two strategies in particular were (and sometimes still are) “favorites” of mine. Perhaps they will resonate with you as well:

Let’s take a closer look at how these two “solutions” impacted my life.

Push it down deep and bury it.

My logic went something like this: If I deny my feelings and reactions, they won’t exist. So, that means if I double-down on myself with talk like “Suck it up” and “I’m just being too sensitive” and “I shouldn’t feel/think like that,” and I keep repeating those messages internally as I push the “unpleasantness” (see how I just minimized my own experience) and fear (that’s more accurate) deep down inside—then everything will be alright. Having been called “too sensitive” a lot as a child, I often felt the need to hide that I even hada trigger. What triggers? What reactions? What emotional upheaval? Nothing to see here—move along, thank you!

While I might have thought this was working for me at the time, there was an unanticipated (although in hindsight, obvious) side effect. Buried emotional triggers soon become landmines. Over time, with no conscious map reminding me where these little treasures are buried, even I “forgot” where they were. And when my body would start to tense up and emotions would bubble up, as they inevitably do, I’d have that sensation that something awful was lurking underneath. My solution? Push it further and further down and cover it with heaps of blame and a dash of shame. In the process, I was convincing myself that I was somehow deficient to even be having these feelings in the first place.

And before long, some unsuspecting soul would step on one of my buried landmines. The internal explosion would be really big—sometimes catastrophic to my well-being. I tried to contain it, like holding in a sneeze. But keeping it bottled up was exhausting. I needed another way to cope—and so I decided all of my troubles would go away if no one stepped on my triggers or pushed my buttons.

Enlist an accomplice to take responsibility for you.

There were some triggers I was painfully aware of, and I came up with what I thought was a brilliant solution: I would tell some people what “sets me off” or “makes me feel bad”—and it would be their job to help me avoid those things. I told myself that if they loved me, really loved me, they would always remember to stay clear of my triggers and landmines. Thus the very act of someone forgetting to be mindful of my triggers became its own triggering event. It meant that they didn’t love me enough.

Giving someone else responsibility for the care and feeding of your triggers ends up making them responsible in some way for all of your feelings. And it adds more triggers and potential buttons—and more scary emotions like helplessness and resentment if they happen to forget or miss something. Essentially, you are giving away your own power. How you feel, how your day goes, how you show up in the world, is now in someone else’s hands. These are the seeds of enmeshment and codependency. And all those original triggers? They’re still there.

Years of guarding my triggers and pushing them down only made them stronger. Years of repetition of these strategies culminated in me believing that I couldn’t count on people and even worse, couldn’t trust myself. In essence, since no one can possibly monitor you foryou, you are bound to feel disappointed, let down, and at times worthless and unloved. I had no strategies to handle that. And all of these thoughts had become so ingrained in me that I was no longer aware of what had started it all in the first place. All I knew was that I was pretty darn miserable. Something had to change.

The Question That Changed Everything

During my most recent “growth spurt,” I was doing a lot of reading and I came across a question that completely changed my perspective on how I saw triggers. The question was: “What would your life be like if you didn’t have any triggers?”

I wanted that life. What if it was really was possible to work towards softening my own uber-responsiveness to certain stimuli? This was the first time I really understood that my triggers are, well, mine. So, if they were mine, then I could—maybe—change something inside methat would help me lead a more wonderful and calmer life. I had been working so hard to prevent and avoid so many things from the outside that it had never occurred to me that I could work withthem on the inside.

From Hot-Button to Reset Button

The awareness thatI had created these triggers initially as a way to stay safe, and that I had done so from a very young age, helped me understand that they had become like well-worn paths in my brain. Our brains love to create shortcuts and make connections for us. My auto-pilot reactions needed to be reexamined from my now-adult perspective.

My newly budding mindfulness practice became invaluable to me as I learned to recognize what was occurring in my body and my mind—and to accept it, without judgment (easier said than done). I learned and then grew to believe that I was only doing the best I could with the knowledge and experience I had. Now it was time to stop running from whatever was frightening me and preventing me from being fully present. It was time to turn and say, “I see you—what do you want from me?” Could the triggers and associated emotions possibly offer me something of value? A clue of sorts to something important that needed attention?

The Wonderful Thing About Triggers

Bringing the light of awareness to what I had buried was an essential and painful early step. I had to listen to my own inner dialogue, the story I had been telling myself and hadn’t challenged in years—if ever. As my awareness of my internal workings increased (with direction and support from wise counselors and many, many books and classes), I discovered that the person who was being so hard on me—relentlessly judging everything I was doing and how I was being—was an internalized voice from somewhere in my past. It was coming from inside—which was good, because that meant I could turn down the volume and soften the tone.

There is so much power in pausing, recognizing habitual responses and behaviors, acknowledging them, and working through the layers to get back to the core of your being—your true self. You are not the sum total of your triggers. Learn how to pause, process, and then act instead of reacting. You’ll find you have a choice and can respond differently than you did in the past.
I changed my relationship to my triggers by casting them as clues that can help me discover what I need to let go of—and what I need more of. Go ahead and push the inner reset button. I just noticed that inside of “reset” is “rest.” And resting is one of the most powerful and healthful things you can do. You may not be “trigger-free” but you can reduce their power and use their energy as fuel for growth.

Linda Wiesinger, CiPP5, is the founder of Why Not Sprout?!®, dedicated to the ideas that transformation is possible and that every single human being deserves peace, happiness, and contentment in their lives. A Certified Competent Coach trained in Julia Stewart’s School of Coaching Mastery, Linda has also studied nonviolent communication with Thom Bond, interpersonal neurobiology with Daniel J. Siegel, and mindfulness and character strengths with Ryan M. Niemiec. She holds a bachelor’s degree in psychology and spent more than 20 years as an international marketing research consultant in the pharmaceutical and healthcare industries, designing, planning and moderating hundreds of custom projects around the world. whynotsprout.com