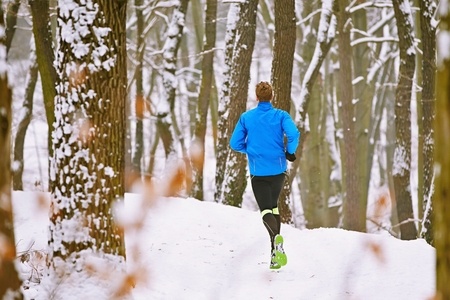 I did not want to. But I had no choice.

My mind knew all the reasons I should—in fact, I would be presenting them later that day, to my fellow Certificate in Positive Psychology (CiPP) students.

But still. My body was not convinced.

Yet there I was in the pitch black, wearing what looked like a hunter’s blaze orange jacket, a coal miner’s headlamp, and an exotic dancer’s tights.

I was going for a run.

I had promised my friend Stephen that I would meet him, and I was not about to break a promise. Moreover, I didn’t want to break a vow I had made to myself, and to the bigger story that my research into running had revealed to me. Running, when pursued in light of the discoveries of the positive psychology movement, can make me (and you) happier and more successful, and promote flourishing.

That part I did want.

So off we went. Just catching up with Stephen, an attorney, PhD, and former Army Ranger, was worth setting my alarm for.

Yet this was about so much more.

Running offers a simple, timeless way to re-establish connection with my body. I could feel the P in my SPIRE chart rising with every step.

Physical, yet more than Physical. Running connects me to all the letters represented in the SPIRE methodology, the aspects of myself that were being pinged and prodded and stretched and transformed at every turn on this week in the Berkshires.

This morning, running was boosting my Relational value, as I shared my thoughts and hopes with my partner, a Boston Marathon qualifier. Later in the week, running helped me connect with other students, including one who had just finished her first marathon and another who had only been running for three days.

The runs gave us time to discuss each other’s work, boosting my Intellectual capacity, and share empathy for family situations, applying much-needed salve to my Emotional state. And seeing (really seeing) the sun rise on a snow-covered mountainside in 14-degree weather is as close to Spiritual awakening as I’ve experienced in a long time.

For those of you keeping score, that’s five for five.

I also think these freezing runs qualify as the kind of hardship that breeds resilience. It might seem like an oxymoron, but it was nothing if not a “crucible of cold” that we endured, and immediately felt stronger for having endured.

Running wasn’t the only physical practice that unlocked the elements of SPIRE for me during the week of the CiPP immersion. Let Your Yoga Dance® with Megha Nancy Buttenheim was like chugging pure “SPIRE-ade.” Also, in different dosages, were the yoga classes and walks with fellow CiPPsters.

Yet, on this week, I was reminded that there is a wide range of gifts available to us through the portal of the Physical. With the right awareness and appreciation, we can re-establish connection with our whole being simply by engaging our physical self.

As I got ready to put my practice to the test of a busy life back home, I conjured up a silly, joyful image as a reminder: I see a SPIRE chart with colorful flags representing the theories that describe our well-being in each of the five elements of our lives. I see the S for the spiritual awareness of my purpose in life, the I for the intellectual curiosity of learning, the R for the deeper connections I seek by knowing and being known, and the E for the Emotional fulfillment I dream of to put my loving heart at peace.

And I see a happy, playful puppy P-ing all over them.

Louis Cinquino, a graduate of CiPP4, is a writer, editor, runner, Dad, channeler of bad poetry, itinerant pick-up basketball player, and direct-response advertising writer whose work has been sent unsolicited to tens of millions of mailboxes worldwide. His personal observations, discoveries, and training plan as he prepared for the Fifth Avenue mile race were featured in “The Mulligan Mile,” (Runners World, September 2013). The article forms the basis of his memoir-in-the-works, Running Back The Clock. You can read more about Louis’ adventures on his blog, TakingMulligans.com, where he keeps asking the same question: What if we ran like there was no tomorrow and lived today like there was no yesterday?