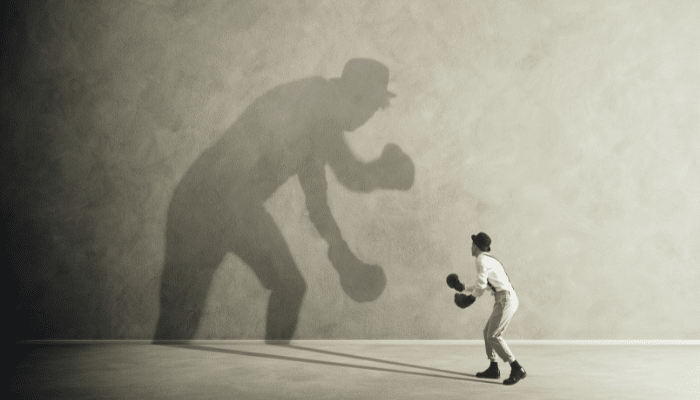 “Stay afraid, but do it anyway. What’s important is the action. You don’t have to wait to be confident. Just do it and eventually the confidence will follow.”

It amazes me how one minute I can be paralyzed with fear, and then two seconds later a sense of peace comes over me.

Everyone has a fear of something at some point. For me, my fear is running out of money. It’s both paralyzing and annoying.

Since being laid off, my fears are totally about running out of money. I have this annoying fear (annoying because it comes and goes) that my family is going to be homeless. I’m 100 percent sure this fear stems from feeling unsafe as a child.

My parents went through times when money was scarce and their marriage experienced challenges. Unfortunately, that time for me was during grades 5 through 12, between the ages of 9 and 18. During those years, I lived in 12 different homes, including two stints living in a hotel. My mom worked there as a bookkeeper, so I was always close to her. It was a nice hotel, but it was a hotel. My junior prom date even picked me up at the hotel.

When you live in 12 different homes in nine years, it’s difficult to connect with any home for long. Feeling safe at home? Fuggedaboudit! Feeling safe was a hard feeling to find during that time.

One of those homes was right across from a funeral home. My mom affectionately called that home “Coffin Corner.” (I loved my mom’s sense of humor.) But that’s not the reason why I didn’t feel safe there. One day while living at Coffin Corner, while I was home from school with the flu, a couple came and took the bed I was sleeping on. My mom had sold it because we needed money. I remember having to move to the couch because my bed was literally sold out from under me.

So, when I was laid off from my six-figure salary job as an adult, it’s no wonder that the fear of my family becoming homeless surfaced.

But I’m starting to learn that fear is there for a reason.

It’s a fight-or-flight response. I’ve heard it comes directly from the unconscious reptilian brain. Our reptilian brain is programmed to help us to survive in a prehistoric world. So, we are programmed to fear anything that might be associated with a threat to our survival.

Breathing helped. But one thing that has helped me even more is naming my fear.

If you are paralyzed by fear, name it. When you name it, it loses its power.

I don’t mean giving it a name like, I have a fear of “public speaking” or “running out of money.” (No sh*t, Sherlock!)

I mean giving it a real name.

Give your fear a name like that little boy or girl down the street who used to annoy you.

I call my fear “Jack.” Don’t ask me why he has that name or why he is male. Development coach and Feng Shui expert Stacy Davenport, one of the wonderful people I’ve been blessed to have in my life, took me through a visualization on fear a month after being laid off. She asked me to give it a name, and “Jack” popped in my head. I think because I was so ticked at being afraid all the time, the song “Hit the road, Jack” kept coming into my mind.

Plus, I feel like Jack is a fun name. I think of fear as being mischievous and annoying, and Jack fits that for me. (My apologies to the Jacks of the world.)

Fear isn’t real. He’s something we imagine. He’s an emotion. And when I named him, he lost some of his power.

I’ve befriended Jack. When he appears, I have a conversation with him. Not out loud, I don’t want to be locked up. (I have talked to him when I was alone but don’t tell anyone.) These “conversations” are short: I ask him why he’s here and what he’s trying to teach me.

After, I give him an imaginary hug and thank him for his thoughts. Then I kick his ass to the curb. Yes, sometimes it takes a lot of kicking. At times, it took me kicking Jack all over the room before he would leave.

But eventually I sent him on his way.

Of course, Jack always comes back. But when he does, the more I hug and embrace him when he first appears, the less time he spends with me. Fear just wants to be acknowledged so he can move on. Sounds like a lot of people you know, doesn’t it?

So, when you’re facing fear, name it.

Fear may be a girl or boy for you. (I say “girl” and “boy” because quite often that fear stems from childhood, such as with parents, teachers or other experiences.)

Choose a name you think fits with mischievous, a name that represents someone who gets in your way, someone who is annoying, someone you might want to befriend if he wasn’t so damn annoying.

When he comes back, it’s okay. Love him and kick his ass to the curb again.

Happy Act: Give YOUR Fear a Name!

Sit quietly for a few minutes. Think of something that is fearful to you. Then, close your eyes and just imagine a little girl or boy coming towards you. Describe them in your mind. Is she cute? How old is she? Imagine her as that little kid down the street that you found really annoying.

Listen to her with kindness. Acknowledge her, tell her you understand what she’s trying to say. Then give her a hug and tell her that you have things to do and can’t play with her today.

What name popped up in your mind? Remember that name. That’s your annoying little “fear” friend. She’ll be back and that’s okay. You now know how to send her on her way.

This post is excepted from Lisa Bailey Sullivan’s book Atta Girl!—The Art of Tapping into Your Power and Moxie and Living Fearlessly Happy (in the middle of a sh*tshow). 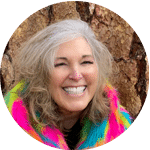 Lisa Bailey Sullivan lives in Austin, Texas and is a wife, mom, recovering corporate marketing exec, happiness activist, the CHO (chief happiness officer) of her crazy-happy life living, and a big believer in living in full color. A CiWPP alum and certified Let Your Yoga Dance teacher, she is also certified in Happiness from Tal Ben-Shahar’s Happiness Studies Academy, has attended Google’s Search Inside Yourself training, and is a certified trainer of Mike Dooley’s Infinite Possibilities. Lisa is the founder of Camp Atta Girl!™, a campy and empowering retreat that helps women rediscover their voices, power, self-love, and joy through the combination of positive psychology and Let Your Yoga Dance. She holds corporate training and retreats in happiness, and recently launched two new happiness tools: Finding Your Superpowers Card Deck, which helps individuals and organizations work with Character Strengths in a fun way; and Live Up To Your Word Card Deck that helps people become happier through the power of words. Learn more about Lisa at lisabaileysullivan.com.