The Courageous Act of Asking for Help 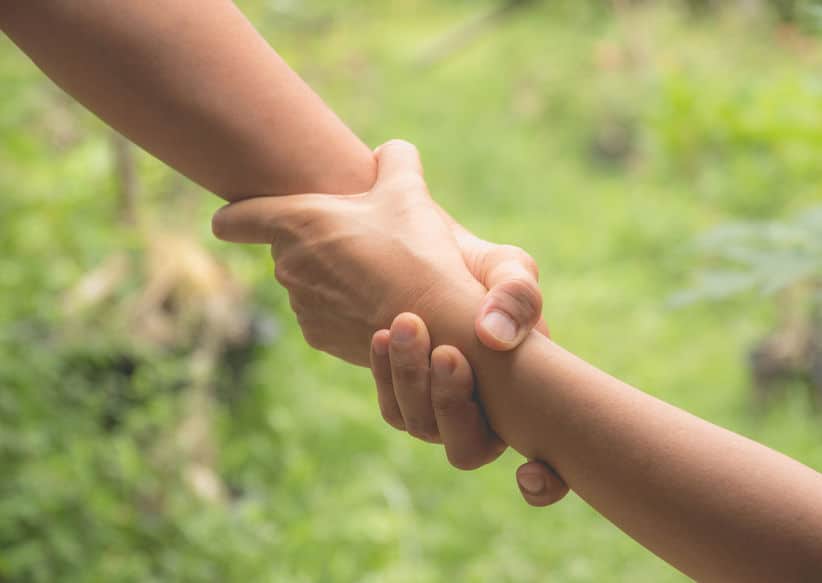 At the start of a new year, many of us identify and commit to changes we’d like to make in our lives. These good intentions can fail, however, if we don’t enlist the help and support that’s often crucial to real and lasting change. Imagining that we can—or should—do challenging things on our own all the time can not only set us up for failure, but also reinforce self-defeating beliefs that make change even harder.

When we’re trying to do or be something new, learning to ask for help can be an important first step.

A few months ago, I noticed my coaching client scribbling earnestly during our session as we were discussing the difference between willpower (“I want to ___”) and “way power” (“I might need help, training, instruction, and a plan to ___”).

What was my client writing, I wondered? “Asking for help is self-care,” she replied.
When questioned a little further, my client revealed an old belief system that equated asking for help with weakness and incompetence.

For too many years, I was self-reliant to a fault—trying to assume control, figure things out by myself, and hide my needs and insecurities from others. I feared being exposed, burdening people with my needs, and arousing criticism and condemnation.

WBI’s Maria Sirois notes that the fear of asking for help is often accompanied by feelings of shame. “We think we’re wrong because we’re not feeling well, or we can’t get off the couch, or we’re scared about the future, and we assume that other people are wiser and better,” Maria says. “If we were raised in [family] systems where asking for help is considered weak, there’s self-judgment around it. And some of us have reached out for help and been rejected, or been given poor guidance, so we’re afraid to ask again.”

For me, it took a crisis to reveal that “I’ll do it all myself” is, ultimately, a lonely and ineffective way to live.

I was 34 years old and delivering a newscast in my former public radio job when a panic attack—live, on the air—rocked my world and dismantled my facade of control. It also sent me on the journey of recovery that ultimately launched my career as a coach, teacher, and writer focused on personal transformation.

The panic attack left me with no choice but to ask for help. I enlisted a variety of traditional and alternative healers and landed firmly in psychotherapy, Twelve-Step groups, and personal growth workshops to address old wounds. Emotional and psychological healing became my occupation, even as I kept reporting the news. Eventually, I left my job and moved to Kripalu as a volunteer resident and yoga teacher in training.

During my two years of living and working at Kripalu, I learned about the courage of vulnerability, authenticity, and opening up to receive help. I reached out for support and got it—in sharing circles and one-on-one—from people who were able to meet me in my sometimes very raw and messy states with love and support. I stopped being afraid of my emotions, and let them pour forth in a safe environment.

Experiences like this also taught me that people like to help, and they may even feel honored when we ask. Recently, I was completely distraught over a family issue and reached out to a dear friend. She stopped what she was doing to listen and support me. I thanked her profusely the next day, still wrestling with old feelings of guilt for “bothering” someone.

Her reply, so beautiful and surprising, was, “Thank you for being in my life.”
Last year, I decided to take a dream trip to South Africa with my chorus. Struggling financially in the wake of a divorce, I needed help paying for it. I applied for a scholarship, launched a fundraising campaign for the rest of the expenses, and received even more money than I’d asked for. It was a miraculous and humbling experience that left me full of gratitude, and marveling at the generosity of people.

We often ask for help when we’re on our knees, literally or metaphorically. It’s typically what brings clients into my office, when the pain of staying stuck or unhappy has become too much to bear. The same client I mentioned above remarked during our initial consultation, “I used to think life coaches were only for corporate executives, and then I read a book that said anyone can benefit from working with a coach, so here I am.”

Needless to say, I was thrilled about that book, and my client’s breakthrough.
If asking for help is a skill you’d like to learn and strengthen, you can start with small requests and work your way up to bigger ones. Recall all the times and ways you’ve gotten a boost from being helpful, and give others that same opportunity. Maria recommends a mindfulness practice to reinforce these beliefs.

“Choose a 48-hour period to mindfully notice how often people reach out for help, or how often you are helpful to others, so you become aware of the natural, daily, organic exchange of people helping each other,” she says. “And because help includes kindness, you can notice acts of kindness, which are sometimes easier to see.”

None of us can do this life on our own. My own journey has taught me that asking for and accepting help actually brings me closer to people and creates wonderful bonds. It’s also healing, productive, self-loving, and brave.

And, sometimes, it can lead to miracles.

This post was originally published by Kripalu Center for Yoga & Health.

Kim Childs is a CiPP graduate and a Boston-area certified life and career coach specializing in positive psychology, creativity, and soulful living. Learn more about her work and schedule a free initial consultation in person or via phone or Skype at kimchilds.com.